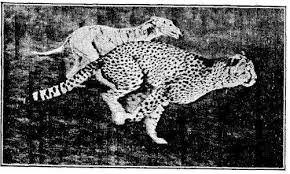 What gives the Greyhound its ability to race with such speed around 40 to 45 mph only the Cheetah is faster at 65 mph?

Part of the ability comes from the running style which is the same as a Cheetah, and is called double suspension gallop.  They have two periods during a run when all 4 legs are off the ground- they take a leap forward propelling all 4 legs into the air like they are jumping a fence, this is the extended phase, then the fore legs touch the ground one after the other allowing for more forward motion of the hind legs till they all meet suspended above the ground in the contracted phase after which the hind legs touch the ground one after the other to propel the forward leap of the fore legs.  This style of running causes the feet to touch the ground only 25% of the time- so I guess you could say they fly part of the run.

Built for speed with long slender legs, flexible spine, small waist, large muscles, and a deep chest all complementing each other to gain such incredible speed. The large chest accommodates large lungs allowing the dog to gulp oxygen in order to supply the needs of the muscles at a phenomenal rate, and an oversize heart which weighs 1.18 to 1.73 % of its body weight compared to .77% for other breeds, humans have .5%.  While racing, the greyhounds heart can beat 300 to 360 beats per minute which means the heart will contract and refill with blood five time per second to give a rapid transport of oxygen to the cells, and conversely Carbon dioxide back to the lungs from the cells. The flexible spine and small waist allows the greyhound to bend and stretch their bodies so that every stride is more than a body length. 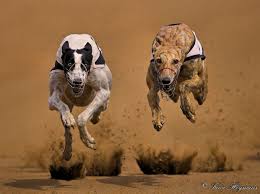 Greyhounds are aerodynamic with narrow heads, short thin coat, and a long whip like body that allows the air to flow off with little resistance. The Greyhounds feet also helps them run fast because it’s long and narrow like a rabbit’s with long webbed toes enabling them to grab the ground better.  The webbing between the toes helps provide more force for the push off power to chase prey. The Greyhound can reach full speed (40 – 45 mph) within 6 strides from the starting box.  Many of these traits have been bred into the greyhound by a multitude of dog breeders throughout the ages- the breeder would look for a good example of a trait that they wanted in a group of dogs then successively breed those dogs to get the trait better and better. 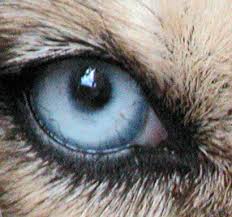 Greyhounds are sighthounds meaning they primarily hunt using eyesight with ability to see up to a ½ mile away.  They have a strong instinct to chase moving objects, and will pursue it to the exclusion of all other things happening in the world around them, many greyhounds have been injured or kill by cars or other reasons in their mad dash to catch the fleeing object.  Should you take your Greyhound out for a walk and loose the lead because the dog leaped at a fleeing rabbit or some other small animal, you will not be able to call them back because they cannot/will not stop the chase, and you certainly can’t catch up to them. Not till the chase is over will the Greyhound wonder where you are, and perhaps try and find the way home so beware and have a firm grasp on the Greyhound’s lead.