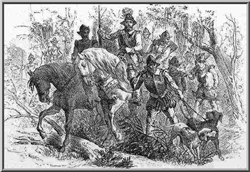 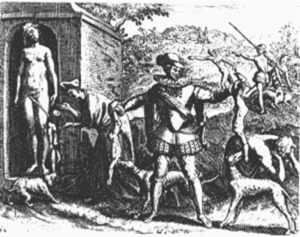 Columbus’ second voyage in 1493 had as part of its company 20 dogs, mastiffs and Greyhounds.  They were brought along to terrify and subdue the natives which they did with extreme violence as they were war dogs, trained from an early age to attack men. This was easy in America as the natives dressed so differentially the worry of the dogs turning on their own company was not an issue.

In 1541 Melchor Diaz while looking for the gold rich city, Cibola, reported by Fray Marcos, who had supposedly seen it on an earlier expedition, was killed while trying to kill a Greyhound that was chasing several sheep that they had brought along with them as live supplies.  He had thrown a lance at the dog while 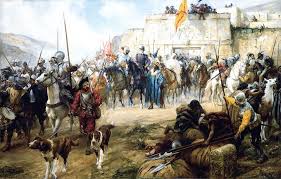 riding his horse unfortunately for him it missed the dog but ended sticking straight up out of the ground unable to stop his horse he was impaled. He did not die immediately- suffering for around twenty days as his men tried to get him back to the ship.

Though the first introduction of Greyhounds to America was for nefarious purpose, large numbers of them were imported in the mid- 1800s from Ireland and England to rid the Midwestern farms of an epidemic of jackrabbits that were devouring their crops. They were also used to kill coyotes that were killing livestock as a result they became quite common on farms and ranches throughout Kansas, Missouri, Oklahoma, and Texas.

The first Greyhound racetrack in America was built in Emeryville, California, in 1919 by Owen Patrick Smith and the Blue Star Amusement Company.  This was an oval track with Owen’s new invention, a mechanical Lure, which he designed as a less bloody alternative to the live one used traditionally in greyhound field coursing. Greyhound racing caught on big time as the Indusial Revolution enable the lower classes with disposable income to take to the races. By 1930, 67 dog tracks had opened across the nation.

40 States have outlawed Greyhound Racing, and four more Connecticut, Kansas Oregon, and Wisconsin do not have greyhound racing even though it’s not banned.  Texas, Alabama, Arkansas, Florida, Iowa, and West Virginia have active live racing. Fifteen states without live racing allow simulcast betting on greyhound races in other states. There has been a huge loss in total amount gambled on greyhound racing since 2001 around a 65% though it has been admitted that wagering could be happening on unreported online formats.  Clearly the perceived mistreatment of the greyhounds has brought about a big change to the industry. 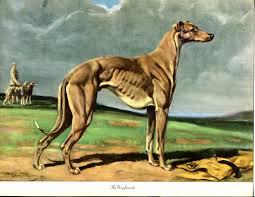 There is no shortage of horrific tales of mistreated greyhounds running the gauntlet of overcrowded kennels, inferior medical care, and the killing of slow or retired dogs. Americans love their dogs, and many will not support in anyway their abuse.  In response to these revelations, state gaming commissions have developed strict guidelines as to how the dogs should be treated.  Violators face criminal penalties. Even so, when money is involved we will always have those people that seek an abundance of fortune in spite of the harm they bring upon the dogs so the watch groups stay vigilant.