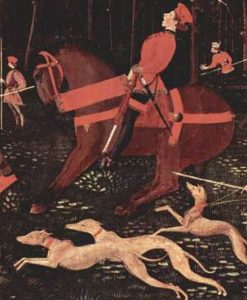 Greyhound racing in Great Britain had its beginnings in a type of hunting called coursing- when a small group of dogs run after prey animals- such as a rabbit. The first official coursing meet was held in 1776 at Swaffham, Norfold with specifications of only two greyhounds to course a single hare with a head start of 240 yards. 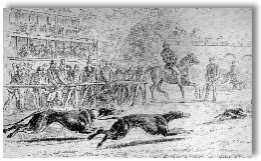 Coursing with an artificial lure was first attempted at Hendon, England, on September 11, 1876. Six dogs raced on a 400 yard straight course, chasing an artificial hare riding on “an apparatus like a skate on wheels” along a single track, according to a newspaper account. Advertised as “coursing by proxy” the race did not fare well and the idea was abandoned.

The oval track and mechanical hare was brought to England in 1926 by American, Charles Munn, who made a deal with Owen Patrick Smith, the inventor of an artificial lure system used widely in America at the time, for the rights to promote greyhound racing in Britain.  The first person he contacted was Major L. Lyne Dixson a leading figure in British field sports who was enthusiastic after Charles presented his vision for greyhound racing. The two men then attracted Alfred Critchley, a Canadian Born World War 1 flying veteran, and Sir William Gentle, a retired chief constable then together the three formed the Greyhound Racing Association Trust Ltd in August 1925.  They decided to introduce the sport in Manchester because of its multitude of sporting and interests already in place so they built the first greyhound racing stadium close to the center of the city and called it Belle Vue, and the first race around an oval track in Britain was held on July 24 1926 at 7.30 pm. This happen at distressing for the economy, there was a million unemployed, the first general strike in history was taking place and troops had been deployed to trouble spots throughout Britain so this was a very welcome diversion to troubled times as an affordable exciting day at the races. The races were so successful in cities and towns throughout the U.K. consequently at the end of 1927, there were 40 tracks operating.

Regulated tracks are licensed by the industry’s governing body, GBGB (Greyhound Board of Great Britain), and races take place under their rules of racing. There are 24 tracks currently licensed. The GBGB sets the standards for the greyhound’s health- ensuring also that the racing on its tracks is safe, fair and credible. 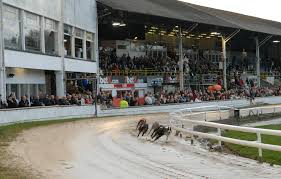 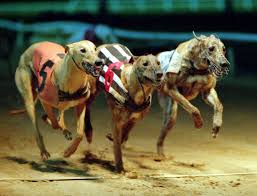 Independent Racing also known as flapping tracks are not licensed by GBGB and do not need to follow the same requirements and rules of racing. Currently there are nine independent tracks operating in Britain.   The gist is, you take your personally kept dog to the track on trial days and let them run either alone or with other dogs.  If he/she does well enough, they will be graded to race on that track or they can run under the new dog rule.  The New Dog Rule means you can take your dog to the track of your choice on race night where it will run from the handicap box against the best dogs on the track. The advantage is Independent Racing allows you to keep the greyhound without putting it in a kennel- though this can mean more abuses as less checks are being made.