Perhaps Greyhound Racing is best understood looking through the annals of history. Many civilizations have anecdotal evidence left to posterity about the Greyhound so we know they go back more than 8000 years.  Dogs were domesticated by early humans as hunting companions to chase down prey… hare, foxes, badger, and deer, and the elimination of predators. Selective breeding practiced within these early civilizations produced the embodiment of the Greyhound: superior speed, agility, intelligence, with a loyal nature that has remained steadfast through the ages. It was the earliest breed of dog, depicted in Art and Literature as companions on a hunt. The term Coursing describes the use of two or more of these dogs to hunt food or eliminate predators. This developed over time into a form of entertainment that used two or more of these hounds to pursue a live hare follow by a group of owners or spectators.  In 1776 Lord Orfoerd organized the first public coursing club in England which became a favorite form of entertainment throughout Europe and America during the 1800’s

There are many instances throughout history of how cherished these dogs were, so much so, that the preferred various points of the Greyhound were put into rhyme in order to remember with ease. Like the one below written in 1486 by Juliana Berners, a nun from the Abess of Sopewell in her book of St. Albans on Hawking, Hunting and Fishing, 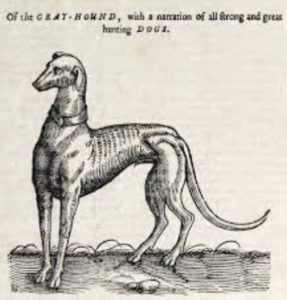 and chyned lyke a beme.”

Egypt revered them as Gods mummifying them to preserve as companions to their dead masters in the afterlife, which was seen as a sort of continuation of the one that came before, so indeed the Greyhound was desired for those supposed wild hunts.  Many of us have seen the pictures of Pharaohs with dogs that look like greyhounds in pictures showing reverence toward them.  In ancient Egypt these sight hounds (dogs that hunt by sight rather than scent), were first recorded 8,000 years ago, and limited to ownership by royalty.

Ancient Greece and Rome most likely got some of these hounds from traveling Egyptian merchants some time before 500 BC as Art and coins from Greece depict short-haired hounds that look a lot like Greyhounds highlighting a breed of dog so well formed for a fast thrilling wild hare hunt. Without a doubt, humans have taken a great interest in breeding consistent characteristics over perhaps more than 2000 years.

The first time we find the Greyhound mention in Western Literature was in “The Odyssey”, written by Homer in 800 BC. Odysseus the hero spends 20 years fighting the Trojans, and wandering the seas unable to find his way because he is cursed by the Gods for sacking Troy. When he finally gets home, the only one who remembers him was his beloved sighthound Argos whom he had bred before leaving for Troy. Odysseus was heartbroken that his once noble hound that hunted wild goats, deer, and hares with him was lying on a manure heap full of fleas.  As soon as he saw Odysseus he laid back his ears and wagged his tail, but his masters return was too much for his depleted system and he died in the instant of his recognition.

Britain’s Middle Ages, even enforced a law that forbade commoners from owning these dogs, and only a noble with the Kings permission could own and breed Greyhounds.  King Canute (c. 985- 1035) ruled England from 1016 to 1035 postulated laws that limited the ownership of Greyhounds to the Aristocracy. These Laws called Forest laws lasted around 400 years. 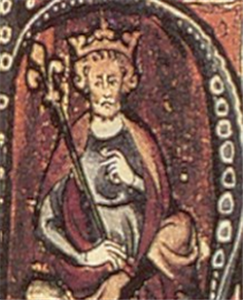 “Peasants may not own Greyhounds only the nobility. Court officers will be sent out to the villages to ensure the laws are adhered to and will sever the tendons of peasant’s dogs if they live less than 10 miles from the forest. Anyone found hunting with their dog inside the forest will be fined and their dog confiscated.”

The origin of the name Greyhound has been lost to antiquity.  However, many theories abound, and some are:

The original Greyhound stock was mostly grey in color which is called blue today, but the color is quite rare today.

The corruption of the term “gazehounds” since they rely on sight rather than scent when hunting.

The Greeks may have called them ‘Geekhounds” by the Greeks then as they entered England from Greece the name was understood as Greyhound by the English.

The name was derived from the Latin word “gre” or “gradus” meaning “first rank among dogs” which related the care and breeding of these animals to the English Aristocratic.

There are 18 official colors of the Greyhound- black, red, fawn, blue, pied (any color spots on an unpigmented (white) background), and finally brindled (strips or tics) or not. Grey or rather Blue colored is very rare.

Other breed characteristics show a dog with an aerodynamic build giving the impression of significate speed with their narrow head, long legs, and muscular rear end. Greyhounds are about 25 to 30 inches tall, and males weigh 65 to 85, with females running smaller at 50 to 65 pounds.  They have a short smooth coat that can cause him/her to shiver in cold climates. The Greyhounds ability to turn, dodge, and change direction while maintaining balance, coupled with a double suspension gallop (they run such that they don’t touch the ground during two separate parts of their stride) makes them very fast and surefooted. 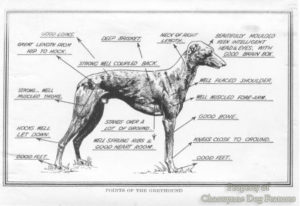 Temperament they are a sensitive breed that prefers a less busy environment without a lot of yelling or loud noises. They are a calm quiet dog that seldom barks, and rather like a cat must be treated and trained with positive reinforcement methods so they don’t become shy or fearful of people.  They have a strong instinct to chase and seize fleeing creatures- this must be understood so your neighbor’s cat or toy dog are not injured or killed when you take your Greyhound for a walk.

Greyhound racing has its beginnings as the sight hunt or Hare coursing in Ancient Greece. The oldest written description of the sight hunt is the work titled Kynegeticos (Greek), or known as Cynegeticus (Latin), written by Arrian circa 180 AD. Arrian describes the chasing of a hare by a group of sight hounds, and in which he states “…true huntsmen do not take out their hounds to catch the creature, but a trial of speed and a race, and they are satisfied if the hare manages to find something that will rescue her”.    The thrill of the race so enjoyed by todays millions has long been enjoyed by our ancestors, it has developed through the ages into a worldwide sport.  During the Industrial Age, the sight hunt lost its popularity as the wealthy man became the business man as now his focus was balancing ledgers and overseeing factories in search for ever increasing wealth.  Once it was realized that these dogs could make larger amounts of money moving away from the friendly competition between friends or business rivals, it soon turned into a gaming venture that in its heyday made thousands if not millions of dollars depending on where the track was.

Britain is credited as the nation that developed modern Greyhound racing with first recorded event was racing the dogs on a straight track in 1876 even going so far as to attempt a mechanical means of the rabbit lure, chasing an artificial hare riding on “an apparatus like a skate on wheels”, but the results were not as good as the live Jackrabbit so it was quickly abandoned.  31 years later in the USA Owen Patrick Smith organized the Intermountain Coursing Association and built a small circular track near Salt Lake City, where his artificial lure was introduced.  A man on a motorcycle pulled a stuffed rabbit skin around the round track.

The best known of the early greyhounds was Mick the Miler who was born in Killeigh Co Ireland in June 1926, and went on to be the only Greyhound to have won the Cesarewitch, and St. Leger Derbies. His fame was such that he attracted such huge crowds, that he is credited, by historians, with ensuring the survival of the sport in its early days. After Mick the Miler retired, he still attracted attention being sought for special appearances with celebrities, and even royalty.  He also starred in a film, WILD Boy in 1935, and upon his death his body was embalmed and to this day he remains on display in the British Natural Museum in Tring.

A special thank you to our sponsors who provide pest control services, driveway paving, a chesterfield va roofer, a roof contractor henrico va, and a chiropractor chesterfield va.